>J was born into a trading community in undivided Bengal.  She grew up with a unstable mother, a nervous father and five or six siblings.  As was the custom in her community, she was married off quite early to a man twelve years older to her in the same community.  Barely did she attain puberty, she was pregnant with a child and from this point on, her life took an altogether different turn.  Her mother and her husband both died suddenly in an attack of small pox, which those days was endemic; J flabbergasted by this turn of events, lost her mind and was locked up in a room probably under advice from the local medico. She gave birth to her daughter but could not look after the daughter due to her illness and her mother in law looked after the infant.

It is not known to me for how long J lived in that hazy, misty world of hers, for when she came to our house, she was nearly forty years old.  All these stories about her is her recollection of her past, which would be presented to me by her differently at different points of time; sometime with a bit of spice and sometimes in bitterness, in anger and in utter deep anguish.
But I could guess how she may have passed her time, what did it take for her to get out of that strange world of depression, part manic, part delusional world of hers.  She says when she felt better, she resumed her husband’s money lending business to local traders, looked for a suitable match for her only daughter who was in her early teens and got her married off.  Since she came from a middle class family(not educated much but with enough money from trading in the joint family business), life should have sailed smoothly thereafter for her;  but it was not to be.
One fine morning, her daughter’s father in law (who was a small trader) disappeared leaving his family in debt and despair.  Her son-in-law took to drinking and drugs, her daughter came back to J with a little baby boy.  While J’s brothers in laws were supportive to begin with, over time they started making their displeasure clear to J that her married daughter with a child were not welcome here, especially when her costs are being shared from the joint family kitty.  By this time, J’s money lending business was usurped by J’s mother in law and that left her with very little money of her own.
So, for the first time in her life, a housewife and totally unaccustomed to the big bad world outside, J decided to work to support her daughter and her grandson.  The only work that she could find was of domestic help, cooking, etc.  Her first job was in Bihar in a older gentleman’s house and his joint family. J learnt to cook, to sweep, to swab, to do all household chores that she was not required to do back at home. 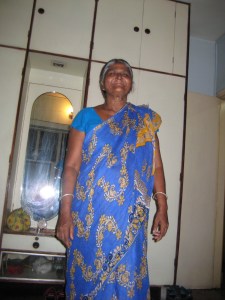 Sarbari I am a Management Consultant who works in the area of Diversity, Gender, Culture and Leadership Development with corporate and non-corporate organisations, groups and individuals. I am also an executive coach. I find myself as the best laboratory and incubator for my learnings about myself and human nature and hence like sharing my views, life stories and other narratives that I build as I go along. I am interested in people, society, culture, ways of life, individual and collective narratives/stories as they allow us to connect with one another as nothing else does. I also write about coaching, people's lives, culture, stories, work as a therapist, mother my daughter, believe in a feminine way of life, and most of all that all politics starts from the self and personal convictions