I made a trip to Goa in August this year. One of the things that struck me right at the beginning was the sheer green cover the place has, and the green was overwhelming. The roads were lined with trees which were covered with creepers all over. The cool breeze of rain continued to sweep through the roads.

During this trip I did not go to all the usual touristy places – rather drove around small villages, roads, small empty beaches, small churches, temples, people doing their daily chores ….. 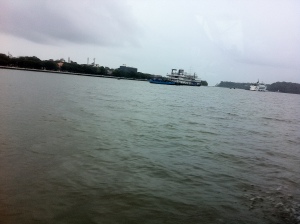 usually when we go around like tourists, we perhaps perceive people as part of the “exhibits” – at least that’s what happens to me. This time, I watched and observed around, drivers who stand around in front of the hotel to pick up passengers, receptionists who are used to the tantrums thrown by the guests, women who sells flowers outside the temples trying to make a quick buck, people in the casinos working as dealers, shopkeepers on the main road of Panjim, waiters at the restaurants used to servicing the hungry tourists…everyone had a story to tell and these stories were written in their gaze, body gestures and in the language used.

I did not actually listen to anyone’s stories but I made them up as I went along during my trip there.

The roads were well maintained, the economic condition of most people were average, the story with the politicians and lack of opportunity for studies, jobs, etc, were the same as the rest of India. In my perception one main difference though was the high dependence on tourism and a kind of tiredness of catering and offering their land to others as exhibits 24/7, round the year with a smile on their faces. I wonder what real dialogue would be line, if they and the seemihad a chance to engage in it.

what do you look for when you travel? what are your stories, specially the untold ones?

Sarbari I live in Bangalore, India and by profession, I am a Psychotherapist, a Gender & Diversity Consultant and an Executive Coach. I write because I like writing, for not particular reason. Sometimes it makes sense to convey to other people what we are thinking ... may it strikes a chord, may be it does not. My life has been my greatest teacher and that's why I like sharing my experiences, life stories and other narratives that I build as I go along. I am interested in people, society, culture, ways of life, individual and collective narratives/stories as they allow us to connect with one another as nothing else does. I also write about coaching, people's lives, culture, stories, mother my daughter, believe in a feminine way of life, and most of all believe that all politics starts from the self and personal convictions