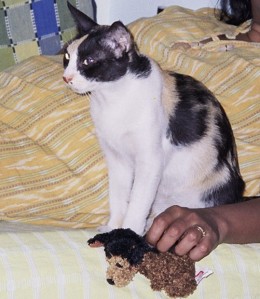 exactly 15 days ago, my maid from kolkata called me at 4 p.m to announce that Kalu had passed away, or rather that she was found dead on the roof top in the afternoon. Kalu, my sweet little innocent, wiered Kalu, the cat with a mole on the upper lip and with a hesitant bid for friendship.

She came into our household after being left to die in torrential rain for two days. Rusha rescued her and begged us to keep her with us. She rescued Lalu the smart and pretty cat a day before. Both were of the same age, about two or three days old, wet to the bone, shivering and crying feebly. But they both were to live – with us, to make us happy, teach us many a splendid things with their royal, majestic cat philosophy.

Kalu had black, fawn and white colour on her body, she was always a little plump as she loved her food, her share of fish and rice, which she would relish. long after the cunning Lalu has finished her share, Kalu would sit and finish every little morsel of rice and fish and all the little pieces of catchow lying around.

Kalu had green eyes, they always had suspicion in them but also had curiosity and shyness. If i were sitting in the bedroom, she would come in and would take one halting step towards my lap. then she would perch herself on my lap and then very softly, croak :”meaow” which i guess, meant, “hello there” in her language. which also was a signal for me to pat her on her head, scratch her chin, rub her back, etc. if i forgot to continue, she would nibble at my fingers, first softly and then, if her demands were not heeded to, a little more forcefully. If i yelped, she would look up to my face with an immense expression of hurt, as though saying “what is the fuss all about? it was not that bad, was it?”

what i loved most about Kalu was her capacity to entertain herself. we just had to throw anything at her and she would start playing with it and have fun. it could be a piece of paper, a little red ball, peel of any vegetable, even a green chili would do.

Now that she is gone, it is very difficult to imagine that i will never see those green eyes again, nor that funny wierd face of hers with a mole on her lip, and she would never ever tiptoe inot any of my rooms again.

I guess her time in this world, with us was over. I only hope that she left this world in peace. she was not sick or at least no one knew anything about it. my maid suggested that someone from that house poisoned her. my stomach churned at the thought ….. i fervently hoped she was not.

i am agonised, grieved, sad, angry, depressed – but I hang onto the memory of Kalu and the time she decided to spend with us – her lovely spirit, her loving affectionate nibbling, her curiosity, her desperation and anxiety when both rusha and i left kolkata, her beautiful plump appearance, her love for food, her propensity to get into trouble and utter inability to get out of it …. all of these.

i also feel immensely guilty that i have moved to bangalore five years ago without the pets (two of them have passed away since – only one is left) and i have not been able to do anything. i have blamed lack of infrastructure here and all other kinds of things and i wonder whether there was anything that i could have done.

i remain thus, answerable to you Kalu, to you Pudding and to you Lalu.

and I shall not seek forgiveness.

Sarbari I live in Bangalore, India and by profession, I am a Psychotherapist, a Gender & Diversity Consultant and an Executive Coach. I write because I like writing, for not particular reason. Sometimes it makes sense to convey to other people what we are thinking ... may it strikes a chord, may be it does not. My life has been my greatest teacher and that's why I like sharing my experiences, life stories and other narratives that I build as I go along. I am interested in people, society, culture, ways of life, individual and collective narratives/stories as they allow us to connect with one another as nothing else does. I also write about coaching, people's lives, culture, stories, mother my daughter, believe in a feminine way of life, and most of all believe that all politics starts from the self and personal convictions