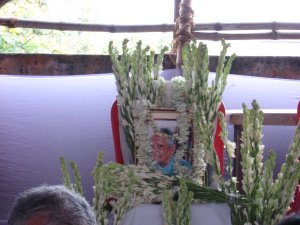 It is approximately 26 days that my father has passed away. His passing away was sudden and hopefully not too painful for him.

I last met my father at home nearly one and a half years ago … when i was leaving Calcutta and that home for good …. in January 2007. I was so caught with anger and disappointment, that i did not even say good bye to him on my departure.

No, i am not going to talk about my regret about that, for i have none. over the last year and a half, my anger and my disappointment about his behaviour and his lack of “self respect” (at least in my perception) had given way to my understanding and compassion for a person who was pre-occupied in his need for safety and familiarity and it was OK for me that he chose his path the way he did. Just because he was my father, he did not have to be “my father”, the way i wanted him to be. He was no hero, he was just a person, as ordinary and as special as i am.

This time, when I landed in the ICU, he looked at me surprised and perhaps even relieved that I had arrived? he even said that he was feeling “Lucky that he met me?” I found that sentence weird in retrospect but at that time I was too caught in giving him some relief and reassurance that things were going to be alright …. that I was there to take care… and that he will be OK.

And three hours later, when i went back again, his eyes were not seeing anything, although he was alive and within half an hour, it was all over.

I had a strange sense of calmness, all i could remember doing then was to inform the people i thought should be informed and chant “Asato Ma Sadgamoyo” in his ears and message his hands and feet and stroke his hair, like he needed reassurance and soothing in his last journey. I did not cry one bit, i did not feel like.

and then the funeral. strange it was that the crematorium had no other dead body waiting there, very unusual …. and that there were a Muslim, a Parsee, a Sikh, a Hindu and Christians around … unrelated and unplanned. some were there to help and some were there to just watch. But all of these people had assembled together just at that moment and no one else. the entire place was empty otherwise. it was strange, very strange. And it remained empty till we were absolutely finished.

the shraddha ceremony went off very smoothly, rain came and went that day almost orchestrated, as though it knew when to stop and when to start. all people who i called, came.

i did the whole kriya with as much focus and concentration as i could. i felt that my father would have liked the way it was done, although he told me many times earlier that he really did not believe in all these rituals. i still did them because i believed despite what he may have said, internally he was this very traditional, patriarchal male who also hungry for affection and attention and who never knew how to grow up and be responsible, for oneself and for others.

yet, in his death, he seems to have done what he could not do in his life time, he left me with a huge sense of peace and harmony. The anxiety that I had held towards Lawrence and his family (well, most of them) melted away as they came forward and supported without any hesitation. My own family, both from fathers and mothers sides came together almost by design. Rusha suddenly turned into this very adult, anchored, supporting person who was also very caring, compassionate and sensible.

I was quite amazed at the turn of events. like i said, as though what he could not do in his lifetime, he did it through his death. He gave me opportunities for healing and for closure, with him, with Lawrence, with some of past and even some of my present.

Today as i sit here and write this, there are many new ways of looking at this person who was also my biological father. He was this smart, intelligent person who felt completely unloved by his mother and was semi adopted by someone else who was herself a victim. I guess my father never came out of it and remained a unfulfilled promise unto himself all his life. all his potential of sports, magic, acting, good looks and charm just went astray and he spent his life away squandering. He never saved money, was always in debt, could not manage responsibility and just did not know how to be an adult. And he was loving, witty, temperamental, sentimental and very very sharp. He was the proverbial romantic for who life had to be perfect, and if it was not, he would have none of it and while it away.

Having me as a three year old half orphan kid, must have made him sick in the stomach. While he loved his 3 year old daughter, he also did not know what to do with her. His anxiety about her well being never allowed him to remarry and settle down and yet her “enormous” responsibility weighed him down to a helpless victim to others.

It is strange that sometimes we are able to look at the “whole” person only after the person is gone; it is as though a curtain has been lifted from in front of our eyes and we are able to see clearly what is there to see.

Does that mean that in order to “see” the other person in full, we may have to imagine him or her as dead? not in a morbid way, but do the person’s physical form, antecedents, habits, and history bar us from experiencing the person in full? Are we all looking at relationships through some kind of curtains that we don’t know exist?

I dont know the answer to any of the above. What i am in touch with now, is that in his death, he has perhaps offered me to live my life the way i want to, without the lament that was so associated with him and without the victimhood that engulfed me everytime i looked at myself as his daughter.

Sarbari I am a Management Consultant who works in the area of Diversity, Gender, Culture and Leadership Development with corporate and non-corporate organisations, groups and individuals. I am also an executive coach. I find myself as the best laboratory and incubator for my learnings about myself and human nature and hence like sharing my views, life stories and other narratives that I build as I go along. I am interested in people, society, culture, ways of life, individual and collective narratives/stories as they allow us to connect with one another as nothing else does. I also write about coaching, people's lives, culture, stories, work as a therapist, mother my daughter, believe in a feminine way of life, and most of all that all politics starts from the self and personal convictions